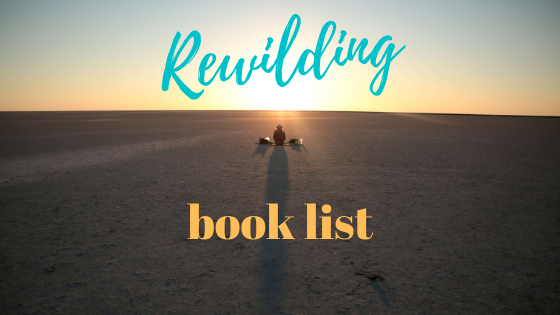 Here I offer a list of the most compelling, inspiring and educational books that I’ve come accross so far in the last couple years, as my interest (and slight obsession) in the subject has led me to research and delve deeper. There are plenty of other books on more specific subjects such as nutrition, conservation, anthroplogy, primal movement etc…, but here I decided to focus this list (mostly) on those who have dedicated themselves to the subject of rewilding as a whole. If you’re here yet not sure what rewilding is really about, by delving into some of these you’ll have a much better understading in no time!

A New Path: To transcend the great forgetting through incorporating ancestral practices into contemporary living

In this very complete and holistic take on the subject, Arthur looks at everything from ancestral and indigenous wisdom, nutrition, and movement, to wild medicine, nature connection and community. It has become somewhat of a rewilding bible and textbook for me!

Maybe a path where we recognise we are meant to be wild beings (and not technological automatons) has some promise – a path where human creativity is guided by a deep nature philosophy. Such a path, the neoaboriginal path – is completely within our ability to create. We simply must take off the blinders of domestication and truly see the current state of the world

Although not about rewilding per se, Yuval takes the reader on an evolutionary journey throughout history. Finally a history book that clearly lays out the transitions our species has gone through from the very beginning, highlighting our transformation from nomad to sedentary, hunter-gatherer to agricultural society and how this shift affected everything that followed up until today.

The human collective knows far more today than did the ancient bands. But at the individual level, ancient foragers were the most knowledgeable and skilful people in history

Rewild Or Die: Revolution and Renaissance at the End of Civilization

Rewild or Die is a collection of essays written by Urban Scout exploring the philosophy of the emerging rewilding renaissance, in which civilized humans are thought to be “domesticated” through thousands of years of sedentary, agrarian life. This way of life is believed to be the root of all environmental destruction and social injustice.

Picture a world where humans exist, like all other living things, in balance. Where there is no separation between “human” and “wild.” Unlearn, Rewild boldly envisions such a world, probing deeply into the cultural constraints on our ability to lead truly sustainable lives and offering real, tangible tools to move toward another way of living, seeing, and thinking.

Rewilding is a movement towards reconnecting with place, growing roots and dedicating ourselves to a bioregion, slowly learning how to live in that place in a way that fits into its rhythms

Although this one leans more towards the conservation aspects of rewilding, George touches upon aspects of human rewilding which are also part of the quest to rewild the land. After all, it is all connected. “Through his eyes, we see environmental success―and begin to envision a future world where humans and nature are no longer separate and antagonistic, but are together part of a single, healing world.”

Rewilding recognises that nature consists not just of a collection of species but also of their ever-shifting relationships with each other and with the physical environment. It understands that to keep an ecosystem in a state of arrested development, to preserve it as if it were a jar of pickles, is to protect something which bears little resemblance to the natural world.

Dark Emu: Aboriginal Australia and the birth of agriculture

In this seminal book, Bruce Pascoe uncovers evidence that long before the arrival of white men, Aboriginal people across the continent were building dams and wells; planting, irrigating, and harvesting seeds, and then preserving the surplus and storing it in houses, sheds, or secure vessels; and creating elaborate cemeteries and manipulating the landscape. All of these behaviours were inconsistent with the hunter-gatherer tag, which turns out to have been a convenient lie that worked to justify dispossession.

Any country will have naysayers among its citizenry, be it regarding climate change, birth control, taxation, gun control, or speed limits; however, if the general population persists on hiding from obvious facts of history, we are destined to repeat the selective opinions of the colonists.(…) it us up to our politicians and educators, and ultimately the public, to reconsider the pre-contact Aboriginal economy.

On the Wild Side: From the Anthropology of Hunter-Gatherers to Postmodern Foraging, Bushcraft and New-Age Nature Seekers

This book is a story about a personal search for the ‘natural’ and for living ‘in nature’. The author is an ethnobotanist who has studied foraging practices in many parts of the world, including Eastern Europe, the Balkans, the Caucasus, China and Laos, as well as experimented with living as a primitive hunter-gatherer in his land in the Polish Carpathians. He describes his own experiences, the lives of various hunter-gatherer groups reported by scientific literature, and stories of friends who are also in search of closer contact with nature.

More recent studies in the disciplines of medicine and psychology show how beneficial the maximalisation of habits that resemble primitive ways of life can be for human wellbeing. The include a diet rich in protein, based on good quality lean meat and wild plants rich in nutrients, a diet low in sugar and fat, an active lifestyle, beastfeeding children for a long time, and belonging to a small group with strong emotional ties. Maybe soon the great importance of periodic fasting, cruel initiation rites and shamanic trance will also be ‘scientifically’ proven and will be as obvious as holidays by the sea

Lukasz Luczaj, On the Wild Side

Women who run with the wolves

Dr. Estes uses myths and folktales to illustrate how societies systematically strip away the feminine spirit. Through an exploration into the nature of the wild woman archetype, Dr. Estes helps listeners rediscover and free their own wild nature.

Clarissa Pinkola Estés, Women Who Run With The Wolves

Losing Eden: Why our minds need the wild

Delicately observed and rigorously researched, Losing Eden is an enthralling journey (…), exploring how and why connecting with the living world can so drastically affect our health. Travelling from forest schools in East London to the Svalbard Global Seed Vault via primeval woodlands, Californian laboratories and ecotherapists’ couches, Jones takes us to the cutting edge of human biology, neuroscience and psychology, and discovers new ways of understanding our increasingly dysfunctional relationship with the earth.

There are multiple reasons why babies born in the rich developed world have a less diverse population of mycobacteria – for example, the use of antibiotics, diet, lack of breastfeeding and reduced contact with the natural environment. We live inside, often in air-conditioned buildings ceaned with antibacterial sprays, with reduced exposure to organisms from the natural environment via plants, animals and the soil. Our food is sprayed and wrapped in plastic. We don’t live alongside other species of animals, as we did for millennia.

In this novel, Daniel Quinn parses humanity’s origins and its relationship with nature, in search of an answer to this challenging question: How can we save the world from ourselves?

A book that appears to have inspired many to seek a life of rewilding.

You’re captives of a civilizational system that more or less compels you to go on destroying the world in order to live… I think there are many among you who would be glad to release the world from captivity… This is what prevents them: They’re unable to find the bars of the cage.

Daniel Quinn, Ishmael: An Adventure of the Mind and Spirit

In Rewild Yourself: Becoming Nature Rachel Corby addresses the longing search for meaning, what she calls the dark cries of the soul, that have emerged alongside the human-nature disconnect. Rachel writes with a passion and a deep love for the wild. In developing ones senses and natural instincts she invites you to join her in finding ways to redress the balance. She encourages you to find the wild place inside and overcome a little of your own domestication, to rebuild connections and communications with nature allowing for a free-flow between the wildness of the world and your wild heart.

“As you rewild, as you become nature, you will gain a deeper knowledge and understanding of the whole of nature including yourself. You may find yourself changing; your outlook, desired, behaviour. People will notice and wonder what’s your secret as you gaina kind of luminosity, an ethereal glow. And as you begin to care for the earthworms with as much respect as you care for your mother there will be a knowing inside that you finally have come home.